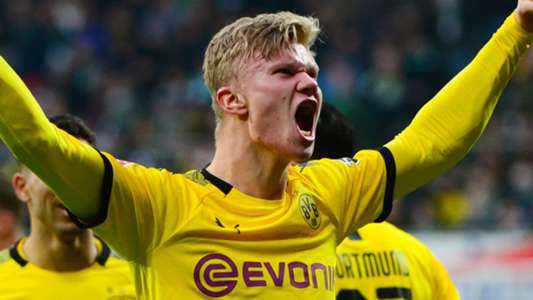 The Norwegian graced Saturday's Tuttosport front page as the best player aged 21 or under from a top-tier league in Europe.

The prize, presented by Italian newspaper Tuttosport and won by Joao Felix last year, is given to the best player aged 21 or under from a top-tier league in Europe.

Haaland scored 44 goals across all competitions in 2019-20 – 16 of those coming in 18 appearances after a mid-season move from Austrian champions Salzburg to Bundesliga outfit Borussia Dortmund.

Among all Bundesliga players last season to have scored at least 10 goals, only Bayern star Robert Lewandowski (81.2) had a better minutes-per-goal record than Haaland (81.7).

Haaland has six goals in as many Bundesliga appearances for last season's runners-up Dortmund this term.

The 20-year-old has found the back of the net four times through three Champions League fixtures in 2020-21, taking his tally to 11 goals from 11 matches across all competitions.

Start young and always remember to keep fighting for your dreams! I hope the world gives you unity and inclusivity.  #UniversalChildrensDay pic.twitter.com/YQNjT3fat7

Haaland continues to be linked with a blockbuster switch from Dortmund amid reported interest from the likes of LaLiga champions Real Madrid and Premier League giants United.

But his father Alf-Inge Haaland told SPORT1 during the week: "When you play well, it's only logical that big clubs knock on your door, but we're talking about speculation here.

"At the moment it's not in Erling's or my head that another club will be vying for him. We signed a long contract with Dortmund and they have a fantastic team for Erling right now. We don't want to look any further ahead."

Asked if the close season could bring about a move, he added: "You never know what will happen. We haven't talked about such a step yet. I think he would like to win some trophies with Dortmund. That is his goal. Erling can still achieve a lot in Germany and make great progress. Moving abroad is not a priority for us.

"I sometimes think he wants to and can assert himself in any league. At the moment, he is happy in the Bundesliga and focused on Dortmund. He just wants to be a better player and doesn't look too far ahead."