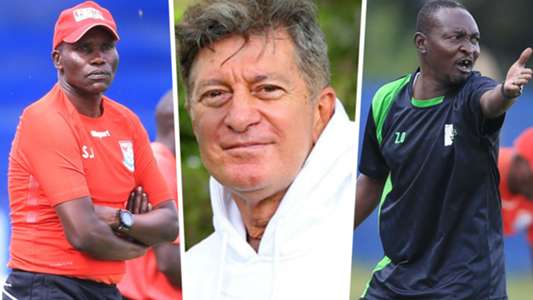 The Kenyan champions have reportedly started looking for a local coach to step in, should their foreign tactician be banned

Gor Mahia have revealed they are shopping around for a local coach who can step in for Roberto Oliveira Goncalves.

This is after the Confederation of African Football (Caf) and the Football Kenya Federation (FKF) confirmed the Brazilian tactician, who joined K’Ogalo as a replacement for Steven Polack, will not be allowed to sit on the bench for Caf and FKF Premier League matches because he doesn’t have the correct qualification papers.

On Friday, Caf wrote to the FKF questioning his qualifications and further warned he will not be allowed to sit in the dugout during their Champions League preliminary round first leg match against Armee Patriotique Rwandaise FC (APR) of Rwanda on November 28 in Kigali.

As if not enough, the FKF also came out to clarify that indeed, the former Rayon Sports tactician did not have qualification papers, with president Nick Mwendwa saying he will not be allowed to coach the team in the FKF Premier League set to kick off on November 28.

Gor Mahia have now confirmed through their secretary-general Sam Ocholla that they are in advanced talks with qualified coaches in Kenya to temporarily lead the team in their continental assignments.

“We initially had five people [Jacob Mulee, Francis Kimanzi, Twahir Muhiddin, Zedekiah Otieno, Sammy Omollo] who have those requirements, but we have zeroed in on Omollo and Otieno,” Ocholla is quoted by Standard Sports.

“We are trying to get one of them on a temporary basis because they are the only ones who are available.

“We are still negotiating with FKF and their clubs. FKF is involved because they have to cover us as the national governing body. Therefore, our fans should be patient and trust the office; we are going to sort out this mess.”

On what will happen to their Brazilian coach, Ochola explained: “We are going to resolve the issue and the coach is going to be given his documentation hopefully by next week. It was just a small oversight from our side but this federation is going to standardise his certification.

“We have already met FKF president Nick Mwendwa and he has advised us on how to go about it.”

In a separate interview, Oliveira has come out to defend himself by saying he is a qualified coach with 25 years of experience.

“Listen I don’t talk this about this story, but I prefer to talk about my players and my preparations and because two years or three years ago, I work in the Champions League with Rayon Sports in Rwanda," Oliveira told reporters after the team’s friendly against Posta Rangers on Saturday

"I qualified Stade Tunisien of Tunisia for Confederation Cup, okay I know sometimes in football it has more problems, but it is not a big problem.

“Because I have experience as an ex-player in the national team and also as a coach in 25 years and the last time here [in Nairobi with Rayon Sports], against Gor Mahia, I think everybody remembers very well about this game, and me too, because strong Gor Mahia was a strong team and we beat them 2-1.”

Caf has already outlined a possible ban that Gor Mahia are likely to face should they fail to abide by the orders.